Rebecca and her son were having a joint birthday. A venue was needed that could be in use all day and night. For that reason, Four Marks village hall was perfect and gave them exclusive access all day. With the party being in fancy dress the photo booth was a perfect addition.

I arrived as the boys were bringing the day time party to a close. The boys were full of energy after so much party food, fizzy pop and other treats. A real-life Ninja had been training them during the day and now they were ready to put their skills to the test. The booth was set-up super quick so that the Ninjas could get their photos. The ninjas promised not to practise any moves on me.

The hall was decorated after the ninja party. String lights, pictures, bunting and balloons helped transform the standard looking room. It was ready for a Jedi Queen. Being a Star Wars fan it was perfect for Rebecca. Even more so when she donned her Rebel Alliance outfit. 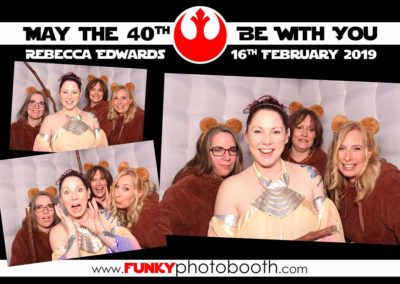 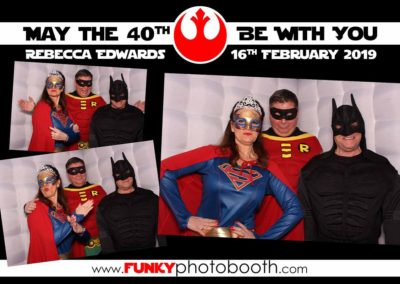 The fancy dress party theme was ‘films’. Guests had put so much effort into their outfits. They all looked fabulous. Even me, (the worst movie buff ever) knew most of the characters they were dressed as.

Rebecca chose our photo booth hire service mainly for the prints. However, the bonus with the Igloo is, that it includes a Boomerang Gif. These short 2-second videos play one way, then playback in reverse. Just the slightest movements and gifs are hilarious. The guests made some stupendous gifs that had everyone laughing out loud. Especially in a fancy dress photo booth.

The fancy dress booth photos were printed around a custom design. Due to Rebecca’s love of Star Wars, she helped design a Rebel Alliance themed print. She also added a rather apt tagline to the prints also. The guests had a great looking memento to take home. Extra photos added to the guestbook looked awesome with some hilarious messages.

Finally, congratulations Rebecca. Thank you so much for hiring us at your fabulous party. Thank you to your guests for creating so many fabulous photos and boomerangs.

If you would like more information about photo booth hire in Hampshire, please do get in touch.